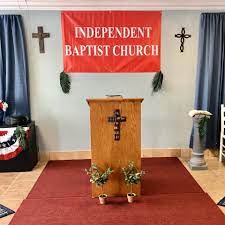 Baptist is Not a Denomination – Written by RobertPatenaude

There is no such thing as “THE” Baptist Church, in the sense of a universal (world-wide), continental, national, regional, or otherwise “church.” We sometimes hear people say, “Oh, he belongs to the Baptist church,” in a denominational sense, as if there exists a centralized earthly hierarchy and earthly headquarters. Biblically and properly, nothing of the kind exists. Biblically and properly, there are only autonomous local churches.

We realize that over the past two hundred years, especially, many local Baptist churches, and localized fellowships and associations of churches, have very unfortunately been led (sometimes coerced) to tighten and expand into huge organizations with presidents, and secretaries, and supra-church board members, and other officers, creating hierarchies and seats of power (headquarters). Then they have put the name Baptist on the entire apparatus: “Such and Such Baptist Convention,” or “This and That Baptist Association,” and so forth. This has led the world, in general, into thinking that all Baptist churches are connected to each other in the same way as United Methodists churches are, Missouri Synod Lutherans are, or even Catholic churches are.  And worse, many Baptist congregations have allowed a denominational mindset to prevail, have ceded away and surrendered their autonomy, and have acquiesced to a hierarchy of individuals determining their order, their finances, their missions outreach procedures, and often their property ownership. In reality, these churches have ceased to be New Testament in the doctrinal sense and have ceased to be Baptist in the historical and distinctive sense.

If you are looking for a New Testament church, locate one that maintains its autonomy strictly, and therefore is unaffiliated and independent. And we will discuss the other distinctives for which you should look later as the Lord leads.