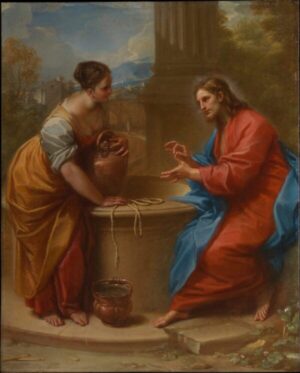 Great Witness – One of the greatest witnesses in the Bible is the woman in John chapter 4. Taking up at verse 16:

16 Jesus saith unto her, Go, call thy husband, and come hither.

18 For thou hast had five husbands; and he whom thou now hast is not thy husband: in that saidst thou truly.

19 The woman saith unto him, Sir, I perceive that thou art a prophet.

Verse 18 the woman was currently unmarried but had 5 husbands in her past. (She didn’t presently have 5 husbands and one in the cooker)

25 The woman saith unto him, I know that Messias cometh, which is called Christ: when he is come, he will tell us all things.

26 Jesus saith unto her, I that speak unto thee am he.

28 The woman then left her waterpot, and went her way into the city, and saith to the men,

29 Come, see a man, which told me all things that ever I did: is not this the Christ?

30 Then they went out of the city, and came unto him.

39 And many of the Samaritans of that city believed on him for the saying of the woman, which testified, He told me all that ever I did.

41 And many more believed because of his own word;

42 And said unto the woman, Now we believe, not because of thy saying: for we have heard him ourselves, and know that this is indeed the Christ, the Saviour of the world.

After her Salvation she was immediately transformed to conform!

Amazing in verse 28 that she left her chores and went, with boldness, to the men of the city!

His Word will not return void! These men left their duties of the day and went to Christ. verse 30

Look and marvel! Many believed because of her witness – verse 39 and 41

A woman cast out by society, family, friends, religious groups, and MOST BAPTIST CHURCHES, was gloriously saved and wrought a magnificent change in her homeland.

Verse 8: (For his disciples were gone away unto the city to buy meat.)

Verse 27: And upon this came his disciples, and marvelled that he talked with the woman: yet no man said, What seekest thou? or, Why talkest thou with her?

Verse 31: In the mean while his disciples prayed him, saying, Master, eat.

Verse 33: Therefore said the disciples one to another, Hath any man brought him ought to eat?

The disciples had physical food on their minds, not Spiritual. What a revival could have been realized if those closest to Christ had a concern for Samaria. Nope, Christ used a woman, considered worthless, to do His bidding.

Lesson: Many in our churches are too big for their spiritual britches. They think themselves to be something, when they are nothing. Pastor, deacon, missionary, evangelist, or teacher – You are not at the top of God’s list of the anointed. *There are no BIG I’s or little u’s *

We all, as the Redeemed, have access to the Throne of Grace and may present ourselves with boldness. Dear Christian, who’s on the sideline, don’t be duped by a haughty and arrogant “leader” in a church. More Reading

Christ is the Head and Owner of the Church for whom we owe submission and obedience – Not any other “leader” in the church building.