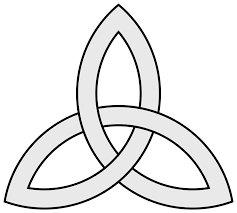 Triquetra (/traɪˈkwɛtrə/; Latin tri- “three” and quetrus “cornered”) (wiki link) originally meant “triangle” and was used to refer to various three-cornered shapes. It has come to refer exclusively to a particular more complicated shape formed of three vesicae piscis (the leaf-like shape in between two equal diameter circles when both centers are on the circumference of the other circle), sometimes with an added circle in or around the three lobes. Also known as a “trinity knot” when parallel doubled lines are in the graph, the design is used as a religious symbol adapted from ancient Pagan Celtic images by Christianity, as is common in Christianity. It is similar to Odin’s symbol, the valknut. NKJV over 100,000 translation changes.

NKJV Part 1– subscribe to the info at this site.

Is the nkjv meddling with paganism, witchcraft, conspiracy, and satanism?

And though the New King James does indeed bear a “likeness” to the 1611 King James Bible, as you’ll soon see, there’s something else coiled (see Genesis 3:1) “underneath the cover” of the nkjv.

So, what about the mysterious mark? Read for yourself here

James L. Melton on the NKJV

The New King James Version, first published in 1979, is NOT a King James Bible. The following information should be helpful when dealing with Christians who have been swindled by the Laodicean lovers of filthy lucre:

1. The text of the NKJV is copyrighted by Thomas Nelson Publishers, while there is no copyright today on the text of the KJV. If your KJV has maps or notes, then it may have a copyright, but the text itself does not.
—
2. There’s nothing “new” about the NKJV logo. It is a “666” symbol of the pagan trinity which was used in the ancient Egyptian mysteries. It was also used by satanist Aleister Crowley around the turn of the twentieth century. The symbol can be seen on the New King James Bible, on certain rock albums (like Led Zepplin’s), or you can see it on the cover of such New Age books as The Aquarian Conspiracy. (See Riplinger’s tract on the NKJV.)
—
3. It is estimated that the NKJV makes over 100,000 translation changes, which comes to over eighty changes per page and about three changes per verse! Many of these changes bring the NKJV in line with the readings of such Alexandrian perversions as the NIV and the RSV. Where changes are not made in the text, subtle footnotes often give credence to the Westcott and Hort Greek Text.
—
4. In the NKJV, there are 22 omissions of “hell”, 23 omissions of “blood”, 44 omissions of “repent”, 50 omissions of “heaven”, 51 omissions of “God”, and 66 omissions of “Lord”. The terms “devils”, “damnation”, “JEHOVAH”, and “new testament” are completely omitted.
—
5. The NKJV demotes the Lord Jesus Christ. In John 1:3, the KJV says that all things were made “by” Jesus Christ, but in the NKJV, all things were just made “through” Him. The word “Servant” replaces “Son” in Acts 3:13 and 3:26. “Servant” replaces “child” in Acts 4:27 and 4:30. The word “Jesus” is omitted from Mark 2:15, Hebrews 4:8, and Acts 7:45.
—
6. The NKJV confuses people about salvation. In Hebrews 10:14 it replaces “are sanctified” with “are being sanctified”, and it replaces “are saved” with “are being saved” in I Corinthians 1:18 and II Corinthians 2:15. The words “may believe” have been replaced with “may continue to believe” in I John 5:13. The old straight and “narrow” way of Matthew 7:14 has become the “difficult” way in the NKJV.
—
7. In II Corinthians 10:5 the KJV reads “casting down imaginations”, but the NKJV reads “casting down arguments”. Yet, the word “thought”, which occurs later in the verse, matches “imaginations”, not “arguments”. This change weakens the verse.
—
8. The KJV tells us to reject a “heretic” after the second admonition in Titus 3:10. The NKJV tells us to reject a “divisive man”. How nice! Now the Alexandrians and Ecumenicals have justification for rejecting anyone they wish to label as “divisive men”.
—
9. According to the NKJV, no one would stoop so low as to “corrupt” God’s word. No, they just “peddle” it (II Cor. 2:17). The reading matches the Alexandrian versions.
—
10. Since the NKJV has “changed the truth of God into a lie”, it has also changed Romans 1:25 to read “exchanged the truth of God for the lie”. This reading matches the readings of the new perversions.
—
11. The NKJV gives us no command to “study” God’s word in II Timothy 2:15.
—
12. The word “science” is replaced with “knowledge” in I Timothy 6:20, although “science” has occurred in every edition of the KJV since 1611!
—
13. The Jews “require” a sign, according to I Corinthians 1:22 (and according to Jesus Christ – John 4:48), but the NKJV says they only “request” a sign. They didn’t “request” one when signs first appeared in Exodus 4, and there are numerous places throughout the Bible where God gives Israel signs when they haven’t requested anything (Exo. 4, Exo. 31:13, Num. 26:10, I Sam. 2:34, Isa. 7:10-14, Luke 2:12, etc). They “require” a sign, because signs are a part of their heritage.
—
14. The King James reading in II Corinthians 5:17 says that if any man is in Christ he is a new “creature”, which matches the words of Christ in Mark 16:15. The cross-reference is destroyed in the NKJV, which uses the word “creation.”
—
So, don’t waste your money on cheap substitutes, especially those that attempt to attach themselves to the King James name. Instead, attach yourself to the real deal, THE Authorized King James Version, and leave the rest in the Laodicean slop shop where they belong.