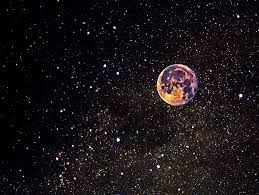 “So Adam had a light travel time problem.” There isn’t a problem here with Adam, we, today, have the problem – if you have Faith and believe in God’s Word. It definitely doesn’t require a scholar, theologian, or government scientist to understand God’s Word. Hebrews 4:12 is for all of us! By the way, the moon gives its own light.

The stars, moon, and sun were immediately visible to Adam just as they are today, simple. Forget what you think you know about light-years. The celestial bodies between earth and Heaven are closer than you realize.

Genesis 1:14 “And God said, Let there be lights in the firmament of the heaven to divide the day from the night; and let them be for signs, and for seasons, and for days, and years:”

Also from AIG, “but the closest star is more than four light-years away.” And we know this how? Aah, because of what man has duped us into believing.

“The heavens declare the glory of God; and the firmament sheweth his handiwork.”

If you serve a God that you can explain, then your god is not my God.

“And he is before all things, and by him all things consist.”

“For the wisdom of this world is foolishness with God. For it is written, He taketh the wise in their own craftiness.”

We lessen and attack the greatness of our God by limiting Him to what we’re indoctrinated with by the science books, telescopes, scientists, and NASA!

So, do you prefer to study to shew yourselves approved or bank on the information from a corrupt government?